Information design aims at explaining facts of the world that leads to knowledge and informed action. In this workshop we introduce different ways of extracting insights from data and convey a message effectively, rather than just attractively or for artistic expression. Participants will become familiar with techniques of data science, data visualizations and interaction design using Quadrigram, a tool to create data-driven websites. Over the week, they will produce two hands-on projects that tell stories and imagine fictional solutions based on real world datasets.

Participants can use the following datasets for their projects. They will explore their quantitative, temporal and geographical dimensions and their relations.

The World's 50 Best Restaurants list, this is made with the votes of about 1000 experts organized into 26 panels divided into as many parts of the world, who vote their 7 favorite restaurants. In total more than 6000 votes serve to make the final list.

The Day of a Bike-Sharing System

According to some researchers, the bike sharing public system of Barcelona (Bicing) saves 12 lifes and avoids the emission of 9,000 CO2 tons per year. They suggest that the associated benefits of using bike for urban travel are much higher that the environmental risks and traffic accidents.

The San Francisco Police Department reports daily the incidents in the city. This allows people (e.g. community groups and neighborhood watches) with an interest in public safety to easily produce maps and reports of incidents from data contained in SFPD police reports.

Fabien Girardin (PhD) is a researcher, engineer and creator who co-founded the Near Future Laboratory, a micro-multinational Design Fiction agency. He leads the exploration of the futures of data products and plays an active role in shaping Design Fiction as a new practice to envision, explain and question possible futures with the production of tangible forms.

Throughout his career, Fabien has pioneered works at the intersection of user experience and data science. Most notably, he developed Digital Footprinting techniques that analyze network data to improve the observations of human mobility, urban attractiveness and hyper-congestion. Also he co-created Quadrigram, a visual programming environment that democratizes data manipulation and visualization as part of a practice he coined as Sketching with Data. 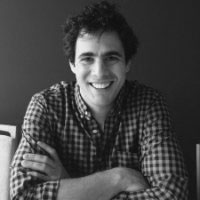 Julian Jaramillo is a 36 year old creative director, and user interface designer. Since graduating with a BA in graphic design from the School of Visual Arts (NYC) in 2004, he has worked as Art Director for The Wall Street Journal, Digital Creative Director at Young & Rubicam and currently he is partner at Bestiario, and award winning technology and design firm based in Barcelona and Bogota.

During his career his work has been recognised and awarded by several institutions and global award shows including: Cannes Lions International Festival of Creativity, The One Club, Clio Awards, The United Nations Department of Public Information, New York Festivals, The Webby Awards, and Facebook Studio Awards, among others.

Near Future Laboratory is a thinking, making, design, development and research practice based in California and Europe.

Our goal is to understand how imaginations and hypothesis become materialized to swerve the present into new, more habitable near future worlds. Our practice involves working closely with creative, thoughtful experts within various domains of work depending on the needs of any particular project. Our associations with a wide network of well-respected and accomplished practitioners makes it possible to work from concept development to construction of unique digital designs.